The National Australian Flag is most often flown by the general public on celebrated days of Australian history such as Australia Day (January 26) or on days of remembrance such as ANZAC Day (April 25). On these days flags can be seen in the streets attached to cars, in shop windows and on an endless array of t-shirts, bumper stickers, badges, fake and real tattoos and even face painted flags are commonplace. The Flag is also flown at international sporting events where Australia competes and it demonstrates the national pride and support of our competitors and sporting ambassadors.

Symbols within the Australian Flag design 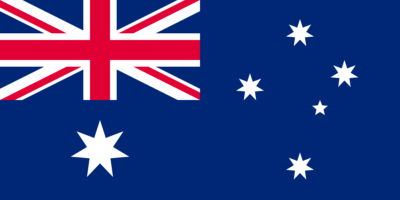 The colours and symbols within the Australian Flag have great significance, there are three primary elements;

The Southern Cross – Located in the second and fourth quarter (right hand side), the Southern Cross is a constellation of fixe stars that is a prominent feature of the night sky and only visible in the southern hemisphere. It is a significant navigational feature and intended to represent Australia’s geographical location.

The Commonwealth Star – This large seven point star is placed centrally in the third quarter of the flag. The seven points denote the six states of Australia and the combined territories of the Commonwealth. The seventh point was an addition eight years after the original in 1909.

The  Flags Act of 1953 proclaimed the Australian National Flag. 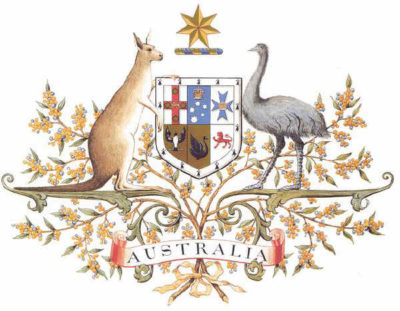 Australia’s current Coat of Arms was granted by King George V in Spetember of 1912 and is the second Commonwealth Coat of Arms. The first version appeared in 1908 and although similar, it did not include any specific references to the Australian States. Recommendations of the Commonwealth Government by King George V led to a number of changes which resulted in the design we see today.

The Australian Government uses the coat of arms to authenticate documents and for other official purposes. Its uses range from embellishing the Australian passport to forming part of all Australian government departmental insignias.

The shield at the centre of the coat of arms is a symbol for the federation of the states and it depicts the badges of the six Australian states enclosed by an ermine border. The shield is supported by two native Australian animals, the red kangaroo and the emu.

Above the shield is the seven pointed gold Commonwealth Star, six of the points represent each of the six states and the seventh represents the territories.

Australia has never adopted any official motto or faunal emblem. By popular tradition, however, the kangaroo and emu are widely accepted as such.