The black swan has been associated with Western Australia from the earliest times. Vlamingh, who explored the Swan River in 1697, gave it the name on account of the number of swans found upon it, and for a number of years after the foundation of the settlement, it was generally referred to as the Swan River Colony.

It is not surprising, therefore, that the Black Swan should come to be accepted as the emblem of the State, though no record can be found of any early official pronouncement on the subject.

It was in use in the eighteen thirties, only a few years after the establishment of the Colony. It appears on Bank notes, issued in the early thirties on account of shortage of specie, and on the “Swan River Guardian” newspaper, first published in 1836; the Royal Arms, with the Swan below, appears at the head of the first issue of the Western Australian Government Gazette of 20th February, 1836.

A design showing the Black Swan was selected for the first Western Australian postage stamps, issued in 1854.

This same device was used on the Ordinances of Western Australia in 1858, and appears on reprints of earlier Acts which were made in that year.

On 17th August, 1869, an Order in Council was issued authorising the Governors of Colonies to fly the Union Flag with the Arms or Badge of the Colony in the centre.

A circular from the Secretary of State notified the Governors of this fact, and Frederick A. Weld, Governor of Western Australia, in a despatch dated 3rd January, 1870 submitted a sketch of the badge which it was proposed to adopt-ie, a black swan on a yellow background. He stated with regard to it “This Colony at its commencement was usually known as the Swan River Settlement, and the Black Swan is represented upon its seal, and has always been considered as its special badge, or cognizance.”

The use of this badge was confirmed by a later Governor, William C. F. Robinson, in a despatch dated 27th November 1875. The use of the badge of Western Australia (on the Blue Ensign) began some time prior to 1870, following the Admiralty Letter of 16th January 1866 prescribing the use of a defaced Blue Ensign by vessels belonging to or permanently in the service of Colonial Governments.

In September, 1912 when the Royal Warrant was issued granting Armorial Ensign and Supporters to the Commonwealth of Australia, the Black Swan was used as the emblem of Western Australia.

Description:- The flag of the State of Western Australia is the British blue ensign, consisting of a blue flag with the Union flag occupying the upper quarter next to the Staff, differenced in the fly or half of the flag further from the Staff by the State Badge situated centrally in the fly. The Coat of Arms of the State of Western Australia was granted by Her Majesty, Queen Elizabeth II, by Royal Warrant dated the 17th day of March, 1969. The blazon of the Arms is as follows:-

In Heraldic Terminology-
For Arms: Argent on a base wavy Azure charged with a barrulet wavy Argent a Black Swan naiant proper.

And for Crest: On a Wreath Or and Sable The Royal Crown between two Kangaroo Paw (Anigosanthos Manglesii) flowers slipped proper.

And for Supporters: On either side a Kangaroo holding in the exterior fore-paw a Boomerang proper.

As the same are in the painting hereunto annexed more plainly depicted to be borne for Our said State on Seals, Shields, Banners, Flags, or Otherwise-according to the Laws of Arms.

In Current Terminology-
For Arms: A silver shield with a base of rippled blue across which is a thin wavy silver stripe. A black swan, in natural colour, and in horizontal position is floating on the blue base which represents water.

And for Crest: Resting on a gold and black wreath is the Royal Crown between two Kangaroo Paw flowers accurately depicted.

And for Supporters: Two red kangaroos support the shield held between them. A boomerang accurately depicted is held by each in their other forepaw.

The Coat of Arms is to be used on seals, shields, banners or otherwise according to the Laws of Arms.

Abbreviated Form With the consent of the Garter Principal King of Arms, the Arms will be produced, for the use in Western Australia, in abbreviated form without the helmet and mantling. A helmet and mantling is depicted in correct heraldic form in the Warrant to conform to heraldic principles, but omission thereof for general usage is in line with the usage of the Commonwealth of Australia and of other Australian States.

Unauthorised reproduction of this Coat of Arms is an offence under the Armorial Bearings Protection Act 1979. Authority to reproduce must be sought from the Chief of Protocol, Department of the Premier and Cabinet, Perth, Western Australia.

The Red and Green Kangaroo Paw was first collected in the Swan River Colony in the early years of its settlement, and was described by D. Don in 1836. 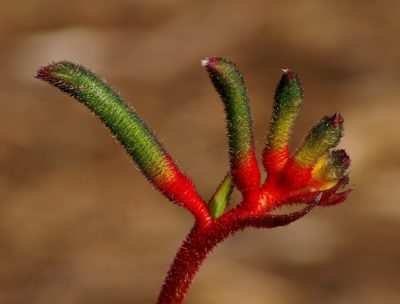 Western Australia’s floral emblem is a flower shaped like a kangaroo’s paw which emerges from a grassy tussock. The Red and Green Kangaroo Paw is striking for its metallic green, furry flowers and red stems. The flowering stems are between 30 – 120 centimeters tall and carry a number of large flowers.

The plants flower from July to November and are usually found on sandy or gravel soils. The species ranges from Shark Bay in the north to Scott River and Mt Barker in the south, and is common in Kings Park, Perth, and the surrounding bush.

The plant was proclaimed Western Australia’s floral emblem on 9 November 1960 and was incorporated into the State Coat of Arms on 17 March 1969. Preferred habitat is Wandoo forest where the ground is littered with fallen branches and hollow logs. Here the Numbat finds both shelter and food and can be observed during daylight hours searching for termites in the logs and sub-surface soil. Termites are the main food of the Numbat and are exposed by the animal’s sharp claws and then licked up by its exceptionally long tongue.

The Numbat is very easy to recognise; its general colour is reddish brown with a generous sprinkling of white hairs, and across the rump are several prominent white bars between which the hair is dark, sometimes almost black. Through the eye there is a prominent dark stripe which is framed above and below by long white streaks. The tail is often carried erect with the hair fluffed out like a bottle brush.

An adult Numbat is generally about 41 centimetres (16 inches) long, of which slightly less than half is tail length. Usually a litter comprises four young which are born between January and April; these are carried or nursed by the mother through winter.

The Black Swan was fir st recorded by the Dutch navigator Vlamingh in January 1697 in the Swan Estuary. Although it is to be found throughout Australia, this graceful bird has been regarded with special affection by many generations of Western Australians and has long been used to identify things Western Australian.

The plumage is black, often with a brownish tinge, but the fli ght quills are pure white and very prominent when the bird is seen in flight. The beak is red with a white band near the tip and the legs and feet are dark grey.

Males and females are similar in size and appearance but males can be identified in flight by their larger neck and, when swimming, hold their neck more erect. The bird’s voice can often be heard at night and is a musical honk or bugling sound.

Nests are a bulky collection of sticks and rushes found in fresh or brackish swamps and lakes. Between four to eight eggs are laid and these are pale green, becoming paler as incubation proceeds. Incubation takes thirty-five days.

Aboriginal lore tells how the family ancestors of a section of the Bibbulman tribe of Western Australia were black swans who had been changed into men. The Black Swan was proclaimed as Western Australia’s bird emblem on 25 July 1973.