In competitions held in 1988 and 1992 artists, and other interested citizens, provided a large range of designs for consideration as the proposed Australian Capital Territory flag. Although there was no general agreement within the community on a particular design, there were some features in common amongst the entries

Elements of the Flag These elements were incorporated into four design options presented by the Members of the Legislative Assembly to the ACT community for its consideration in February and March 1993. The ACT Electoral Office reported that the most popular choice among ACT citizens who expressed preferences on any of the four options was a design featuring the Southern Cross and a modified form of the Canberra City’s Coat of Arms.

The colours of blue, gold and white were chosen for good reasons. Blue and white are the livery colours of the City (shown by the wreath above the shield on the Canberra City Coat of Arms), while blue and gold are the traditional sporting colours of the ACT and were taken from the national blue and gold appearing on the wreath of the Australian Coat of Arms. The choice of colours maintains existing traditions, reflects a link with national history and preserves heraldic tradition and practice.

City of Canberra, Coat of Arms 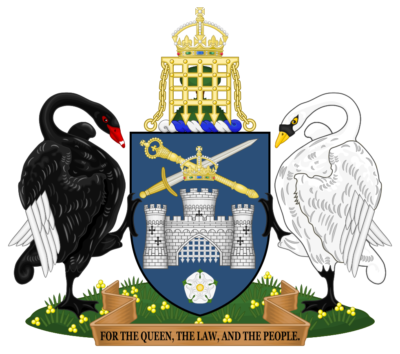 The creation of the Coat of Arms of the City of Canberra originated from a request by the Commonwealth Department of Defence to the Commonwealth Department of Home Affairs and Territories in July 1927. The request was made so that the Coat of Arms could be used on the newly commissioned ship, HMAS Canberra. In August 1927 the Federal Capital Commission (FCC) announced a competition to design a Coat of Arms for the FCC and for the City of Canberra.

The chosen design, drawn by Mr C R Wylie, was sent to the College of Arms, London, in April 1928. After a few modifications, the Coat of Arms was granted by the College in pursuance of a Royal Warrant dated 8 October 1928. The Arms and a Crest were granted on 7 November 1928.

The Faunal Emblem of The Australian Capital Territory 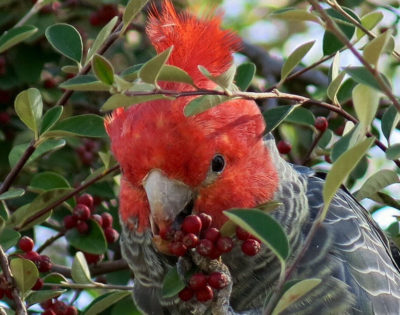 The Gang-gang Cockatoo (Callocephalon fimbriatum) was adopted as the faunal emblem for the ACT on 27 February 1997. Canberra is the only city in Australia where these distinctive ash-grey cockatoos live. During winter small flocks are common in gardens around the city where they feed on pine cones, firethorn and hawthorn berries.

They are often so busy feeding that observers can get close enough to admire their beautiful plumage. In summer most of the flocks return to the mountain forests to breed in tree hollows. Their call is a distinctive sound resembling the sound of a squeaking gate.

The Gang-gang Cockatoo is also the logo of the ACT Parks and Conservation Service.

The Floral Emblem of The Austalian Capital Territory The Royal Bluebell (Wahlenbergia gloriosa), is an Australian wildflower from the Campanulaceae family and  is restricted in distribution to the high mountain areas of the ACT, south eastern NSW and eastern Victoria. The flowers are a deep blue/purple colour, and are very eyecatching.

On 26 May 1982 it was announced that the floral emblem for the ACT would be the Royal Bluebell).

In cultivation it is a frost-hardy ground cover, flowering in Canberra from late October until February. It does best in light soil enriched by organic material, in a sunny or semi-shaded situation. The soil should be kept moist but not waterlogged.

The flower was named in honour of G.G. Wahlenberg, a former Professor of Botany from Uppsala in Sweden. It should be remembered that the Royal Bluebell is protected in the wild and should not be picked or collected.